you are here : home » about us » the director 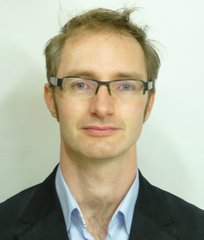 Oisín Coghlan has been Director of Friends of the Earth Ireland since 2005.

Oisín co-founded the Stop Climate Chaos coalition in 2007 and led the 8 year campaign for a climate change law which culminated in the passing of the Climate Action and Low Carbon Development Act in December 2015.

Oisín was one of the co-founders of the Environmental Pillar in 2009, the advocacy coalition of national environmental NGOs in Ireland, and was recently re-elected to the Pillar's steering committee.

Before joining Friends of the Earth, Oisín worked for 10 years in the areas of overseas aid and human rights. He was the founding coordinator of the Latin America Solidary Centre in 1996, moved to Belize as a community organizer among immigrant banana workers and went on to become the Fresh Fruit Manager for Fairtrade Labelling Organizations International in Bonn. Oisín returned to Ireland in 2002 to become head of policy for Christian Aid, working on trade justice, aid policy and Israel/Palestine.

Oisín's primary degree was Sociology and Political Science in Trinity College Dublin and he has a Masters in International Relations from Dublin City University.