Have your say on the future of fossil gas in Europe! 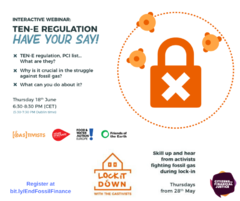 Join this zoom call with Friends of the Earth, Not Here Not Anywhere, Food and Water Action Europe and the Gastivists Collective on June 18th to learn how to have your say on energy policy in Europe.

Register here at this link!

On the call, you will be:

Although we may not understand what it’s like to experience violence and discrimination due to racism, we stand in solidarity with those in the United States and across the world whose lives have been and continue to be severely and negatively impacted by structural racism.

The discrimination, brutality, violence and murder that caused the deaths of George Floyd, Michael Brown, Eric Garner, and Breonna Taylor, to name but a few, is a manifestation of the same false and dangerous perception of difference based on skin colour that is rampant in Ireland, and visible in the way this country treats migrants & asylum seekers via the abhorrent system of direct provision.

Public support for climate action in Ireland among highest in Europe

Public support for climate action in Ireland is among the highest in Europe, according to new analysis of opinion poll data published by Friends of the Earth to mark World Environment Day. Asked whether government should prioritize climate action in the economic recovery from Covid-19, 63% of the Irish public said yes, the joint highest in Europe along with France and Italy. And asked whether their government would be failing its people if it does not act now to combat climate change 71% of Irish people said yes, with only France and Spain registering a higher percentage. On that question Ireland is significantly ahead of New Zealand (63%), Canada (60%), Germany (58%), US (57%) and Sweden (55%) [1].

Commenting on the results, Oisín Coghlan, Director of Friends of the Earth said: 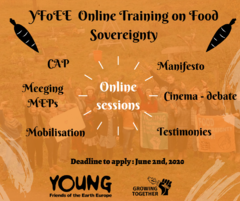 From Friday June 5th, Friends of the Earth organisations from across Europe we will be running an exciting series of food sovereignty workshops, trainings & online events for young people (under 30).

We have fantastic line up of speakers, facilitators and activists AND the opportunity to meet with MEPs so young people can promote their demands on agriculture and food sovereignty at European level. The training will take the form of a series of online webinars.

Click Here to Register – Closing at midnight on June 2nd 2020.

Schedule of the Food Sovereignty training: 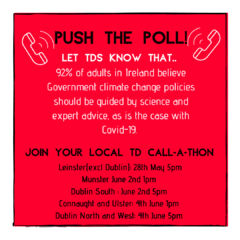 The next week is crucial for the climate.

Three parties are currently negotiating what's called a 'Programme for Government', and we need to do whatever we can to make sure this is as strong as possible. For people, and for the planet.

Can you join a Regional TD Call-a-Thon before June 5th, World Environment Day?

We think the following is a solid strategy for making an impact!

Let's talk about 'Weather', with Jenny Offill and Sinéad Gleeson 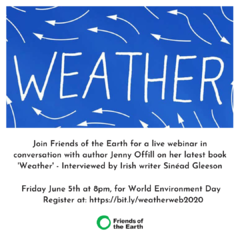 While debating whether or not to host a book club this year, we came across this article in the Irish Times and well, the decision was made instantly.

Join us in conversation with Jenny Offill, author of New York Times best seller, 'Weather'. We are honoured to also have Irish writer, Sinéad Gleeson, on board as interviewer.

This event will be hosted over zoom, at 8pm on Friday June 5th to mark World Environment Day 2020.

Jenny Offill's latest book 'Weather' resonated with many of us on the Friends of the Earth team. It's not often you pick up a book and think, oh I know that story. And you hear so many others around you say that too! 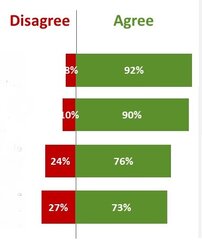 "Stunning" numbers should give confidence to parties negotiating Programme for Government

As the government formation talks focus today on climate policy, Friends of the Earth has published the results of an opinion poll showing overwhelming public support for greater government action to reduce polluting emissions. The headline findings include 9 out of 10 people saying that the government should be guided by science and expert advice on climate action as they have been on Covid-19. And 71% saying the next government will be failing the people of Ireland if they do not act now to combat climate change. 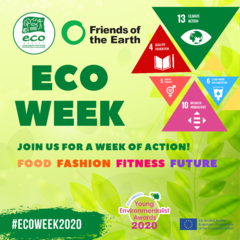 Next week we will be running an exciting series of food and nature related workshops for young people (under 30's) as part of ECO-UNESCO's 'Eco-Week'.

We have an fantastic line up of speakers, facilitators and activists who will explore different aspects of food & nature and how we engage with it. 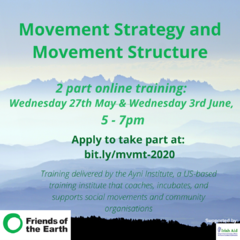 We're so excited to be able to host the Ayni Institute to facilitate a two-part training to activists in Ireland. During this course the Ayni Institute will be teaching how to understand the deeper strategic needs within movements and issue areas.

The Ayni Institute is a small training institute that coaches, incubates, and supports social movements and community organisations. They also develop research and content on movements and movement dynamics. The Institute was founded by Carlos Saavedra, a community organiser with the DREAM movement in the US, and Paul Engler, author of This is an Uprising. They work closely with Momentum US and the Sunrise Movement among others.