We have to fight every fight. 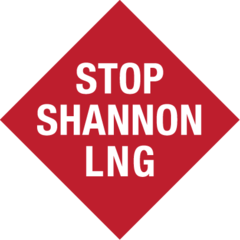 The Climate Emergency exposes our politician’s true motivations. It’s easy for the Irish Government to say stoping climate change is a priority. But when actions have the opposite effect, those words are lies.
The Irish Government recently supported a proposal to build a Liquified Natural Gas import terminal in Shannon. It’s for fracked gas.

Watching and being a part of the rise in climate action across the world has been exciting and empowering to say the least. More and more people are joining the movement, and we need to ensure we're forming a strong community of activism that can last!

Burnout can happen to any of us, and it's something the Friends of the Earth team are acuetly aware of. Because we work so closely with activist groups (and many of us are in actists groups), in supporting skills and capacity building and helping amplify grassroots actions and campaigns, we feel it's important to not only promote community wellbeing within the movement but also provide opportunities for activists to gain skills in this area.

Power Up! is a series of workshops to help upskill and support the growing activist community in Ireland. Meaghan, head of Education and Activism, has identified where activists need the most support and has seeked out those with the relevant skills to deliver these trainings.

Richard Bruton, we want to see your study on Deposit Return Scheme 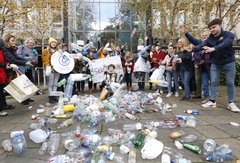 As campaigners welcomed Minister Bruton's first steps to combat plastic pollution they urged him to introduce a Deposit and Return Scheme to capture the 1 million plastic bottles a day that don't get recycled.

Sick of Plastic campaigners who gathered littered bottles for the protest outside the Minister's office were joined by 12-year old Flossie the Beach Cleaner, who spends her weekends picking up rubbish from her local beach.

Cher announces opposition to Shannon LNG on her Irish tour


A ‘Plastic Bottle Rally’ will take place at the doorstep of Minister for the Environment’s office next Wednesday at 1pm to demand action on plastic waste.

It’s almost two years since campaigners [1] ‘Ditched their Plastic at the Dáil' demanding that government introduce a deposit return scheme (DRS) in Ireland for the recycling collection of plastic bottles and aluminium cans.

Ten months following that protest Minister for the Environment, Richard Bruton, announced he would commission a study [2] to see how a DRS could operate in Ireland.

Friends of the Earth Facilitators and Trainers Network! 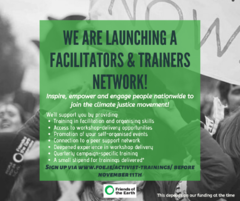 Do you want to inspire, empower and egage people nationwide to join the climate justice movement?

Friends of the Earth have connections around the country, ample experience in campaigning, education & organising, and the resources to support people like you in developing the skills needed to train other activists around the country.

We want to use what we have to enable youto do the impactful work of facilitating others to increases their understanding of the interconnectedness of the issues we collectively face, and upskill in the capacities needed to fight these injustices.

Friends of the Earth will support you with: Join us for a Plastic Bottle Rally 1pm November 6th!

Back in January 2018, we 'Ditched Our Plastic at the Dáil' in support of Zero Waste activist Dianne Forsythe's Uplift petition calling on government to introduce a deposit return scheme (DRS) for the recycling collection of plastic bottles in Ireland.

It took Minister for the Environment, Richard Bruton, a whole year to respond, and the best he could do was commission a study to see how DRS could operate in Ireland. (Despite existing evidence proving that it works). 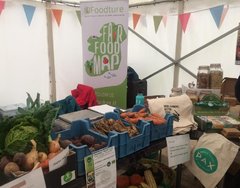 Through October Friends of the Earth were celebrating the Good Food Good Farming Days of Action as part of our Growing Together project by championing the change makers who are shaping a fairer food system here in Ireland.

Good Food Good Farming is a European civil society alliance that calls on decision makers to support for peasant farmers, environment- and climate-friendly agriculture which is tied into local economies across global food chains.

On Thursday October 17, it was revealed at a European Commission meeting that the US fracked gas Shannon LNG import terminal is on the European Projects of Common Interest (PCI) list, without assessing climate or sustainability impacts. Two other gas projects connected to Shannon LNG were shown to be taken off the list.