Talking to your TDs is a powerful way to act on the climate crisis and right now there is so much to talk about.

If 1000+ people across Ireland meet their TDs online it will have a serious effect on how our government acts on climate.

You'll be supported by Stop Climate Chaos and people in your local area.

You don't need to be an expert, you just need to turn up!

How does it work?

1. Sign up here  and receive a zoom link to join the lobby on the 7th December.

Climate Bill’s ambition must be increased and loopholes closed

The Stop Climate Chaos coalition of over 40 civil society organisations today published its recommendations for amendments to the draft Climate Action Bill [1,2]. The Coalition's recommendations have been informed by the testimony of over a dozen expert witnesses, who came before the Joint Oireachtas Committee on Climate Action (JOCCA) in recent weeks. 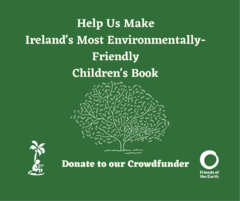 Issued by Friends of the Earth and Little Island Books

We have some exciting news to share with you!

All funds raised through this campaign will go directly into making this book. When the books hit bookshop shelves in the new year 10% of book sales will be donated to Friends of the Earth to support our work on climate. Can you donate to help make this happen?

Climate justice webinar: watch it back + some more opportunities for learning and action

On Wednesday 28th October, we hosted a webinar to explore the concept of climate justice. Climate justice is a term that has been bandied around a lot lately - but we wanted to dig into what it really means. We’ve recorded the webinar so you can watch it back at your leisure. It’s just over an hour in length and comes highly recommended as we had some excellent speakers and panellists from the world of climate justice, who joined us to talk about their work and activism. 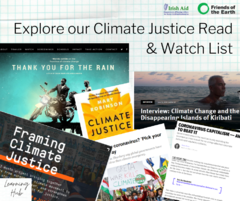 Ahead of our webinar on Climate Justice next Wednesday, 28th October (which you can register for here) we’ve compiled a read and watch list on climate justice that we’d love you to explore! So as the days draw shorter, why not curl up with a hot drink and pick something to read or watch from this list - it's got a bunch of articles, videos and even a documentary film on the subject of climate justice. A few weeks after Wednesday's webinar, we'll organise a more in-depth workshop to explore the ideas that unpin climate justice in more detail. Exploring our read and watch list would be good preparation for that event too.

Close the loopholes in the Climate Bill 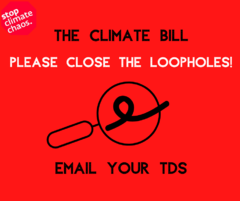 It’s hard to believe but Ireland could have a strong climate law before the year is out.

For the first time ever - and after years of campaigning - this is actually a distinct possibility. But - and this is what fills me with dread - there’s also a chance that this climate law could end up unfit for purpose.

Friends of the Earth, working with our partners in the Stop Climate Chaos coalition, have identified some very concerning loopholes in the climate law’s draft text. Loopholes that could undermine the law’s ability to drive emission reductions. 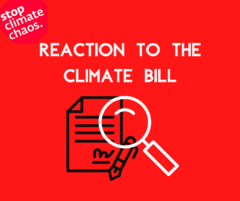 Stop Climate Chaos responds to the publication of the Climate Bill

The Stop Climate Chaos Coalition has welcomed the publication of the new Climate Bill, describing it as “a significant milestone” on the path to faster and fairer climate action.

The campaign group, which includes environmental, overseas aid, youth and faith groups, has been calling for a strong climate law since 2007, and coordinated the campaign that led to the passing of the 2015 Climate Action Act.

"This Climate Bill substantially improves the 2015 law but substantial weaknesses remain that must be fixed by TDs and Senators."

On the eve of the Climate Bill’s publication, Stop Climate Chaos sets five tests for the Bill and outlines essential next steps. 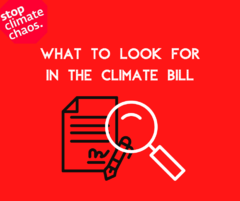 The new Climate Bill is due to be published tomorrow, day 101 of the new government.

Today, 5th October, is Day 100 of the new Government. The Programme for Government committed to publishing a Climate Action Bill in the first 100 days of the new administration. Comments from the Taoiseach on 23rd September, and from the Minister for Climate Action over the weekend, indicate that the Bill is due to be published tomorrow, Tuesday, on Day 101 of the new administration. In advance of the publication of the Bill, the Stop Climate Chaos Coalition, which has been campaigning for a strong climate law since 2007, has laid out 5 questions we will use to assess the Bill and 5 steps the Government needs to take in the next year. Once the Bill is published, we will assess how well it addresses our 5 benchmark questions.