We can see all around us that climate breakdown is accelerating.

From floods to extreme heat and more intense storms, fires and droughts, the climate crisis is already claiming lives and livelihoods.

And the poorest are always hit first and hardest.

The latest science is starker than ever. We have a very small window of opportunity to avoid dangerous tipping points.

We can still avoid the worst climate chaos but only if we act now. 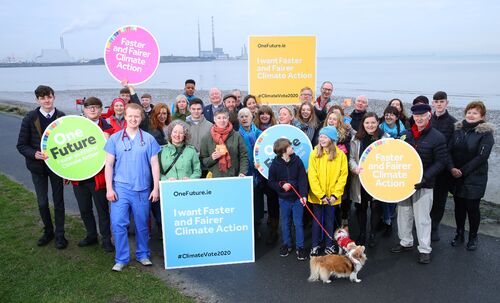 We are campaigning for climate action that is fast enough to avoid complete climate breakdown.

Ireland still has the second highest climate-changing pollution per person in the EU.The Government has pledged to cut our pollution in half by 2030. Now we need the policies to make that happen.

We need to transform our energy, heating, transport, economic and food systems to get to zero pollution as quickly as possible. And we need sustained Government action to make zero polluting options are accessible and affordable for everyone.

Only people power can make sure the Government does the right thing. Join the movement for faster and fairer climate action by signing this petition.

We are campaigning for climate action that is fair enough to leave no one behind.

We’re campaigning to make sure that Government action to cut pollution doesn’t negatively impact the most vulnerable in our society.

Climate action will only succeed by reducing, not increasing, inequalities and poverty. Climate action must be fair enough to leave no one behind.

Join the movement for faster and fairer climate action by signing this petition.