‍The first-ever analysis of the role European supermarkets play in addressing plastic pollution, “Under wraps? What Europe’s supermarkets aren’t telling us about plastic” is a result of collaboration of over 20 NGOs, members of Break Free from Plastic movement, from across Europe. Here in Ireland the Sick of Plastic Campaign has facilitated this report, reaching out to Ireland’s top five Supermarkets; Dunnes Stores, Supervalu (Musgraves), Tesco, LIDL and ALDI.

The specially designed ranking developed by The Changing Markets Foundation revealed a near-complete lack of ambition across three categories: Transparency and performance, Commitments, and Support for government policy.

Of 130 retailers contacted, only 39 retailers (30%) provided a written response to the coalition’s questionnaire, but many of these responses did not provide meaningful replies to the questions. Further analysis of 74 retailers across 13countries revealed a concerning lack of actions to tackle the plastic crisis.

Lyndsey O’Connell from the Sick of Plastic Campaign commented

"Only three of the five Irish Supermarkets surveyed responded. Because of this both Dunnes Stores and Musgraves came last alongside twelve other European retailers getting a disappointing 0/100. Tesco received 3/100, LIDL 16/100 and ALDI scored an impressive 61/100, making them second overall. The Irish average score is a dismal 16. Irish supermarkets positioned at both top and bottom of the scale highlights the inconsistent approach our major food retailers are taking to fight the plastic crisis." 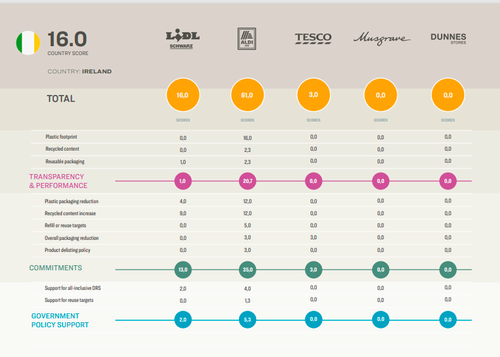 The report uncovered notable discrepancies in scores within international retail groups. Lidl, a brand from the biggest European retail group Schwarz with 125.3 billion EUR turnover in 2020 [1] achieved 44.7% in the UK and between 13% and 23.7% in other countries such as Germany and the Czech Republic.

Similarly, ALDI Süd was the top performer in the UK and Ireland, with 65.3% and 61% respectively, but it only achieved 11% in Austria, where it operates under the name Hofer, and 25.7% in Germany. Aldi is the second biggest retailer in Europe with 106.3 billion EUR turnover. 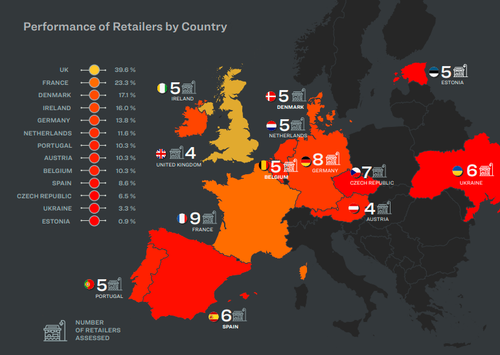 Some European supermarkets, were found to use delay, distract and derail tactics to avoid accountability for the plastic crisis and lobby against progressive legislation, such as deposit return schemes. With the EU aiming to tackle excessive and single-use packaging through the revision of the Packaging and Packaging Waste Directive and legislation on Green Claims, European retailers are not facing up to their responsibility to address the plastic crisis.

“Our report shows that even the best performers, such as ALDI and LIDL have double standards, when it comes to addressing the plastic crisis. They performed well in the UK and Ireland, but show abysmal results in Spain, Germany and other countries where they operate.

“Such differences cannot be explained through different national legislation and show that not a single retailer is responding to the plastic crisis with the urgency this situation demands. Instead of investing in systemic solutions, such as plastic reduction and reuse systems, retailers were found to be greenwashing and delaying legislation.”

Instead of changing business as usual, supermarkets were found to be members of numerous voluntary schemes, such as Plastic Pacts and New Plastics Economy(both set up by the Ellen MacArthur Foundation). The Foundation itself reported that over 60% of plastic their supermarket signatories put on the market was non-recyclable.

Supermarkets were also found to be promoting false solutions, such as in-store flexible plastic take-back schemes in the UK and rebranding single-use plastic products as “reusable” in Spain. Meanwhile, European supermarket plastic packaging waste that was exported to third countries for recycling, has been found dumped and polluting the environment.

Although the current retailer performance is disappointing, the analysis also shows that such abysmal results do not have to remain the reality. Combining the best responses to each question created a fictional “best-in-class” retailer with the total score of 82.7%.

Despite the urgency to act, the amount of plastic that the plastic industry is placing on the market is growing and on a “business as usual” trajectory is even projected to skyrocket. European supermarkets are very important actors when it comes to plastic pollution. With a 2.4 trillion EUR turnover [3] the European retail sector has the resources to act, and public opinion polls consistently show that citizens firmly believe retailers have a responsibility to address plastic pollution [4].

Categorised in:
Waste
Tagged with:
Sick of Plastic