Helping schools to run on sun

Putting solar panels on schools is a no-brainer! It lets schools produce energy from the sun, slashing their electricity costs AND reducing their polluting emissions. A decent feed-in tariff would also let schools make money from excess energy they produce and feed into the grid. Putting solar on schools also makes them a beacon of hope in their communities - showing that renewable energy can be small-scale and community owned - with benefits for both climate and people! 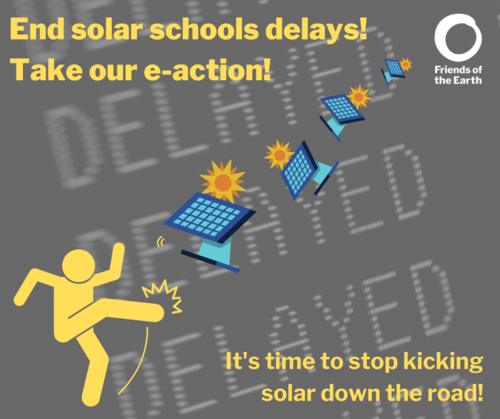 There is cross party political support for changing the planning regulations to make it easier for schools to install solar. The Government has repeatedly promised to change the rules but it still hasn’t happened - delays on this issue just go on and on and on.

We can’t let the Government get away with any more hold-ups on this when we’ve such an array of climate actions that need to be implemented quickly if we’re to meet our climate obligations. Want to act on this?

Here’s what you can do:

Two minute action: Use our handy e-action tool to send an email to your TDs, asking them to raise these solar school delays with Minister Darragh O’Brien, who is the decision maker on this issue.