Ireland’s international ranking for climate action has improved slightly in the latest Climate Change Change Performance Index (CCPI), published at the COP27 climate talks in Egypt this morning. Ireland moved up 9 places from 46th to 37th, just above Brazil and below Bulgaria, but remains among the “low-performing countries” in the annual rankings compiled by Germanwatch, based on information provided by national experts. It was Ireland’s historically low ranking in the CCPI in 2017 that persuaded then Taoiseach Leo Varadkar to concede that Ireland was a “laggard” on climate action.

The CPPI remarks on Ireland this year include the following:

“Ireland receives a medium rating in the Renewable Energy and Energy Use categories, with a low in Climate Policy implementation and a very low in GHG Emissions.

“The CCPI experts note that significant progress in climate policy in 2022, with the introduction of legally binding carbon budgets and sectoral emissions ceilings. However, government implementation remains weak with necessary actions and measures delayed or ignored in many areas.

“The experts welcome the five-year carbon budgets and sectoral emissions ceilings approved in 2022. However, they stress these improvements urgently need to be translated into substantive actions across all relevant sectors to actually reduce Ireland’s emissions.

“The country’s agricultural policies continue to support intensification of livestock farming, which increases GHG emissions, harms water and air quality, and is a primary contributor to biodiversity loss in Ireland. The experts highlight the need to reduce use of reactive nitrogen in fertiliser and to pay for ecosystem services.

“Government plans for offshore wind are substantial, and new schemes have been introduced in transport, microgeneration, and energy efficiency. Use of coal in power generation, however, has increased. Energy retrofits and solar photovoltaics are not being delivered at the necessary scale and not reaching those most at risk of energy poverty. Fossil gas infrastructure and gas connections are also still being promoted.

Speaking at COP27 after the launch of the 2023 CCPI, Clare O’Connor of Friends of the Earth said:

“The slight improvement in Ireland’s ranking, from 46th to 37th, is an acknowledgement of the adoption of binding national and sectoral limits on pollution. But our overall low rating reflects the fact that our emissions are still rising and the Government’s adoption and implementation of policies and measures to cut pollution is still far too slow.

“Ireland’s first Action Plan under the new climate law is due to be adopted by Government before the changeover of Taoiseach in December. That plan is now the litmus test of our determination to shed the ‘laggard’ label that has dogged us for good, and do our fair share to contain climate breakdown” 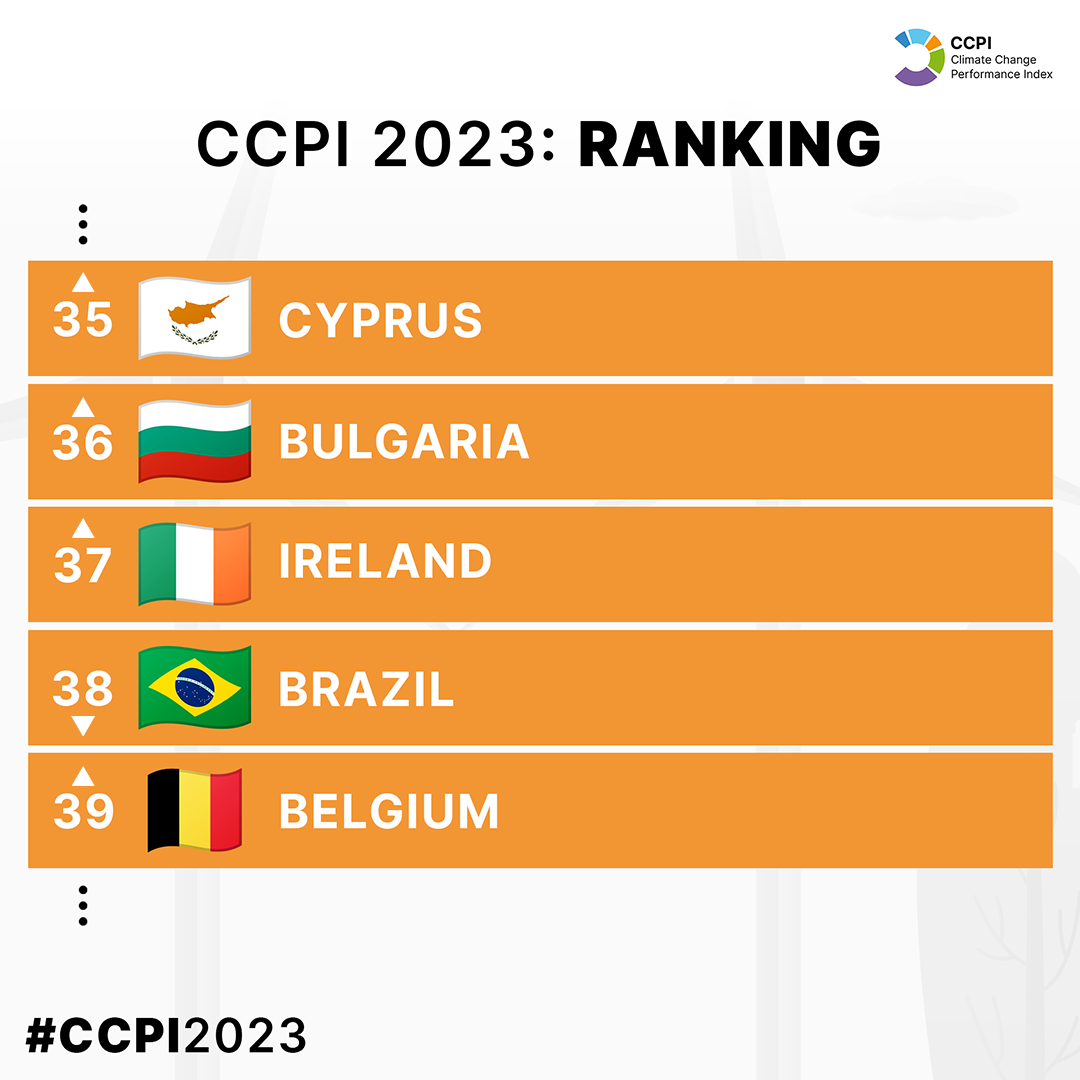 In their overall remarks on the new ranking the CCPI team commented:

“Russia’s invasion of Ukraine illustrates that most countries still heavily depend on fossil fuels. This dependency affects countries’ ability to function and to provide essential services for their populations.

“We can use this external shock to improve how we heat, move, and live sustainably, or we can continue supporting our current and dangerous fossil system. This sustainable transformation’s importance and urgency have never been clearer – not only to save our climate but for our future society and peace.

“Expansion of renewables and energy savings are the backbones of decarbonisation. In 2022, renewable energy (RE) supply grew significantly because of falling costs. The World Energy Investment Report 2022 shows RE comprising the majority of energy sector investments. Investments in fossil fuels, meanwhile, did not rebound to pre-pandemic levels.

“Yet there is a persistent and critical need to use all available opportunities and to halt all support for fossil fuels. Recent developments show that fossil infrastructure is growing in response to the energy crisis. Energy demand reduction in developed countries and energy efficiency improvements in developing countries are also imperative for supporting the energy transition.”