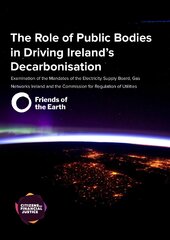 ​​Without urgent Government intervention, the ESB, Gas Networks Ireland and their regulator could lock Ireland into fossil fuel use for decades.

Friends of the Earth Ireland via its involvement in the Citizens for Financial Justice European project commissioned an independent researcher to examine the role of public bodies in driving Ireland’s decarbonisation - focusing on the Electricity Supply Board (ESB), Gas Networks Ireland (GNI) and the Commission for Regulation of Utilities (CRU).

The research found that, rather than driving decarbonisation, the ESB, GNI and CRU are actually undermining Irish and international climate targets. All three bodies address decarbonisation in their strategies or mission statements in the form of “low-carbon” commitments. However, our research demonstrates that their respective statutory authorisations (i.e. mandates) do not specify compliance with national and international climate law, are not fully aligned with Paris Agreement obligations and do not properly address principles of climate justice or sustainable development.

​​Reducing carbon emissions from the energy sector can only happen by cutting out fossil fuels. It is therefore very concerning that public bodies are showing no signs of doing this. It would be highly dangerous to rely on unproven false solutions such as Carbon Capture and Storage, which also come with a myriad of ethical problems and are vehemently opposed by climate justice movements.  There is simply no room for continued fossil fuel investment in a world that is already experiencing severe climate impacts.

​​Therefore urgent Government action is now required to revise the mandates of Ireland’s public bodies so that they align with climate targets. The Government can do this by amending Ireland’s Climate Law, as part of the planned publication of a new Climate Amendment Bill within the first 100 days of the new Government coming into office.

Email those who can #ReformTheMandates NOW via this link

​​You can read the full report here at the link

​​You can read the executive summary here at the link 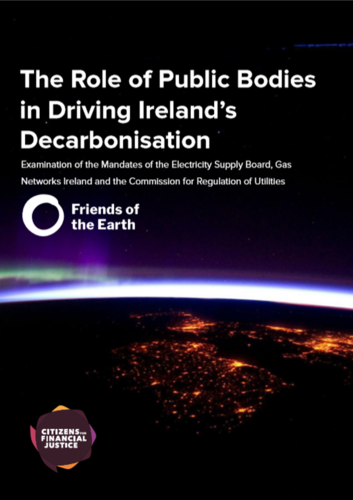