As the Government’s major public consultation on Energy Poverty closes today, and with just 3 weeks to the Budget, 42 civil society organisations call on Government to protect Irish households and prevent fossil fuel lock-in ahead of a winter of unprecedented energy costs.

With just 3 weeks until Budget 2023, 42 civil society organisations [1] have written to the Government to demand action to protect our most vulnerable before winter arrives and unprecedented energy bills hit households. This joint letter [2] has been submitted as part of a major Government consultation on a new Energy Poverty Action Plan [3]  which Minister Ryan has announced will be launched in the coming weeks. The ESRI have estimated that almost half of Irish households are now facing energy poverty [4], and that these figures could rise to up to 70% of households in the coming months [5].

The 42 organisations, spanning across the housing, anti-poverty, mental health, environmental and social justice sectors, have collectively called on the Government to address both energy poverty and pollution through direct financial support, regulation of energy prices, and urgent scale-up of home insulation for our most vulnerable. The actions, which must be implemented before winter, include:

“It is crucial that any Government actions to protect Irish families from energy poverty this winter prioritise most vulnerable families and those on lowest incomes. The Department and SEAI should work directly with NGOs and community groups to ensure they effectively reach people most in-need of retrofitting and insulation first.

“We know the solution to both the energy crisis and climate crisis is to reduce our demand for fossil fuels, and Minister Ryan’s new Energy Poverty Action Plan must prioritise renters, the Traveller community, and people with disabilities to ensure they are protected in both energy crisis and climate crisis response measures. Alongside direct financial support, we are also calling for supports for insulation and solar PV to be urgently rolled out for those at-risk of severe energy poverty. ”

“Threshold are deeply concerned about the people living in the private rented sector who are being left behind in Ireland’s Climate Action Plan. Tailored measures, targeting landlords and private renters, are needed to reduce energy poverty among private renters and ensure they live in warm, healthy and energy efficient homes. Our respective organisations have put forward a range of proposals to tackle the joint issues of energy poverty and energy pollution."

“The government’s own report on the extra cost of having a disability showed that disabled people spend 10% more on energy costs, are more likely to be in arrears on utility bills, and are more likely to be unable to afford to keep their home adequately warm. Many disabled people use substantially more energy, to power essential assistive technology like electric wheelchairs, hi-low beds and various machines to support breathing, for example. They have faced hugely escalating energy bills this year, while struggling to live off an inadequate social protection payment that hasn’t even kept up with inflation.“

“Social Justice Ireland is calling on Government to increase all core social welfare rates by €20 per week and to make tax credits refundable.  These two targeted measures would directly assist people on fixed incomes and people in low paid employment who are most impacted by rising energy costs”.

“The cost of living crisis is hitting the poorest in Ireland the hardest. There is a limited amount of time now before the winter months to reduce the disproportionate impact that rising energy bills are having on lower-income households while also making strides towards decarbonisation and cheaper energy costs through home energy upgrades”.

Notes to the Editor 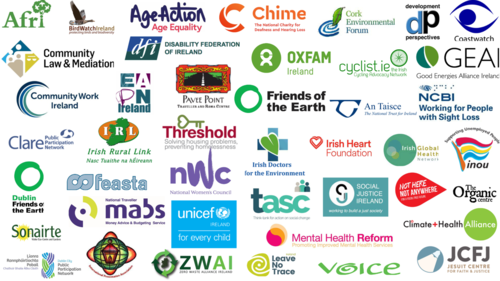 Categorised in:
Energy
Tagged with:
Energy Poverty Power to the People